I Could Chew on This

Fur flies. Wind bites. Eyes sting. I taste the air and swallow freedom. I wish the window were down all the way. Roaming, baying, dreaming—all dogs once were wolves. Wild, wary, nipping at the heels of night, gnawing the edges of dawn, feasting on the flesh of our fear: life was cold and hard and lonely. The fires of men called, and dogs answered.

Canis lupus familiaris, the domestic dog, the family pooch, always makes a great subject for a book. Dogs are loyal, dedicated, well mannered, truly man’s best friend. But anyone who has ever owned and raised a puppy knows that isn’t always so. There’s always a little wild in your hound.

Dogs, like wolves, still have the drive of the pack and demonstrate the need of social interaction with dogs and people. Daily feedings of canned food doesn’t destroy the urge to run down rabbits. Sleeping safely indoors can’t keep him from answering the calls of night. It can be frustrating for the dog living in the world of man.

Luckily, dogs have never been shy about expressing emotions. Your dog will chew your favorite pair of slippers when he’s mad. He’ll wag his tail when he’s happy, and when he’s sad, there’s a slow, mournful sulk. Still, you’ve never truly known what goes on in his mind until now.

Your dog is reaching out to you. He wants to show you his world. His desires, his dreams, and just what he thinks of the new kibble. You will come to see why every bark must be answered, why it was necessary to roll in the rotted remains of that woodchuck, and why the neighbor’s cat must be constantly shown where the property line is.

You will learn the true meaning of loyalty. You will feel the optimism and hope a strong breeze can bring, and perhaps come to understand the deep-seated need to sniff every butt. I challenge you to see the world, as he smells it. So read their poems. I double dog dare you…

Canine? Feline? Or do you prefer to decline? Email me at from_my_shelf@yahoo.com and let me know. Miss a past column? If you’re nosing around the internet, just prowl on over to http://frommyshelf.blogspot.com and devour your fill. Make sure to look for Hobo’s new book set in the wilds of Alaska, “Tramp of the North: the adventures of a carnivorous kitten…


If you'd like to buy this book, why not buy it where you tried it? Simply click on the photo below, or the title, highlighted throughout this post, to purchase the book at From My Shelf Books & Gifts, and to support the writers of this fine blog ;) We thank you! 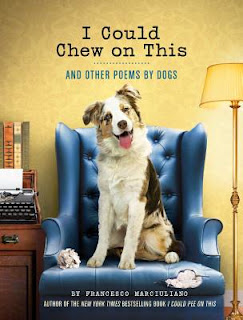 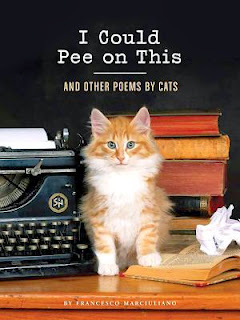 *
*
In Carolyn Turgeon’s newest novel, The Fairest of Them All, Rapunzel herself relates her story. In many ways, it is the story we all know and expect, of a young maiden, living in a tower in the forest. Rapunzel’s hair has amazing qualities: it is as strong as iron cables, as gorgeous as a summer field of sunflowers, and long enough that she can dangle it out of her high window in the tower and it will reach the ground. In each story of Rapunzel, the details of the hair, the tower, her circumstances for being there, differ.

In some stories, Rapunzel is actually a princess, an heir to the throne of the kingdom seen off in the distance, and she is in the tower, hidden away for her protection. In other stories, a witch kidnapped Rapunzel as a child, and holds her prisoner in the tower. In Turgeon’s novel, the “witch” is actually a skilled healer and herbalist, who rescued Rapunzel when she was an infant, saving her from her neglectful and abusive parents. The “witch” Mathena was once a favored advisor at court, beloved by the Queen, but opinion turned against her with the arrival of a new, conservative priest, and Mathena exiled herself to the forest with Rapunzel. Here, the two women lead a life of constant work to sustain themselves and help other women who come seeking healing and help with problems. Rapunzel loves her life, in tune with the earth, the garden, the plants, the seasons. She loves to hunt with their falcon and her bow. She and Mathena have little interaction with the people of the palace, except in the occasional gossip of the peasant women who see them, or when a group of men pass near the tower as they hunt in the forest. Innocently, Rapunzel watches these hunting parties from her tower window, occasionally singing to them.

Rapunzel has never even seen a man up close, until one day there is a knock on the door, and she opens it, thinking it to be another woman seeking help. Instead, it is the prince, the heir to the throne, who heard her singing, and enchanted, wanted to find the woman whose voice touched him. He cordially invites Rapunzel and Mathena to a harvest ball, soon to be held at the palace. Mathena is coolly polite, but, as soon as he leaves, she sternly forbids Rapunzel to go. Mathena insists that Rapunzel should never visit the palace, never get involved with the royal court. It is, of course, too late. Rapunzel is as enchanted with the prince as he is with her. As the Rapunzel stories all include, the prince eventually climbs her hair to visit her in the tower. Turgeon’s novel, however, is no Disney fairy tale. There is sensual magic afoot here, and terrible consequences that inevitably follow. The prince’s “visit” to Rapunzel is a Pandora’s box that begins a domino effect of passion and love, secrets and sadness, ruin and redemption.

Even though the prince is betrothed to the princess of another kingdom, in the hope that their marriage will bring peace throughout the lands, the prince cannot forget his passion for Rapunzel. Though Rapunzel stays in the forest with Mathena, the prince never leaves her mind, for he has given her a beautiful, painful reminder of their passion…. The magic around her grows darker and more powerful, the stakes higher, the choices more terrible. The prince becomes the King; he and his beloved, pious new wife have a beautiful daughter, whom they name Snow White. The young Queen dies when Snow White is only seven, and the King chooses Rapunzel to be his new Queen. Thus, in this mash-up of fairy tales, Rapunzel becomes the stepmother of Snow White. And we all know where this story has led in past tellings.

Carolyn Turgeon’s latest play on classic fairy tales is more reminiscent of the old stories from the Brothers Grimm than any sparkly, kid-friendly Hollywood movie version. There is sex and death, blood and betrayal, old magic and tangled love. The Fairest of Them All is not a moralistic tale, but the story provides plenty of food for thought as well as a new way to look at the messages in old stories.

Disney or dread-locks? A heart filled with love, or eat your heart out? Either way, Hobo wishes to remind all his fans that his are the goldest locks of all, and he doesn’t need a mirror to tell him that. Cats, of course, have no problem with self-confidence. Remember, Carolyn Turgeon will be visiting Hobo at From My Shelf Books & Gifts on Friday, August 16th!

Courage or Truth? Code Name Verity and women in WWII

That’s saying a lot, since we’re currently flying through June 2013 – Laurel Festival will be over by the time you read this, and we’ll all be looking forward to plans for the 4th of July. Obviously, I’m a book fiend who devours as many books a week as I possibly can. Though I’ve been on a big mystery kick these last few months, I’m so glad I finally made some time to read this young adult historical fiction book that’s been on my “to read” list since it was first released in hardcover last May. (It’s available in paperback now!) This is one of those books that made me say, “Why did I wait so long to read this?!?”

Of course, I’m predisposed to fall in love with Code Name Verity, since I am fascinated with the Resistance movements during WWII, especially in France; spies, double agents, and the work of the OSS; early aviators; and the women who fit in these areas of history. It follows that I’ve written reviews on Antoine St.-Exupery, French pilot and author; a factual book written by a woman who worked for and survived the French Resistance, entitled Code Name Christiane Clouet; and Jeff Shaara’s historical fiction To the Last Man, which details the early pilots of WWI, including the Lafayette Escadrille, and the infamous Red Baron. Amelia Earhart was one of my first history girl crushes, and remains a marvel to me. I studied in France, but spent much less time there than I wanted to. So it feels that Elizabeth Wein wrote this book just for me.

However, you don’t need to be a Francophile, an Anglophile, a WWII history buff, or a student of early aviation to enjoy Code Name Verity. This is a story that transcends the time period, with characters that breathe and weep and strain off the pages, and with universal themes that make it a work of great literary fiction. There are hundreds, if not thousands, of fiction books written with a WWII setting – to say nothing of the thousands of nonfiction tomes covering every angle of the War. What makes Code Name Verity stand out from a field of so many choices, many of them excellent?

Without a doubt, Verity is as beautifully written as any WWII book out there, fiction or nonfiction. In the short year since its publication, this writing has been recognized by glowing reviews in everything from The New York Times Book Review to the School Library Journal, and it has won such prestigious awards as the Michael L. Printz Award, the Boston-Globe Horn Book Award, and the Edgar Allan Poe Award for Young Adult Fiction. Wein’s research for the book was a lengthy process, and it shows in every detail of descriptions of the anti-aircraft guns at early British airfields, the new invention of pens that don’t need a nib and an inkwell, and the uniforms worn by the women who worked for the ATA (Air Transport Auxiliary) in Britain.

To say too much about the actual storyline would be to spoil the pleasure of reading it for yourself, but "Verity" is the code name for one of the two protagonists of this novel: she is a woman spy who has been captured in France not far into her mission. Verity has been given a terrible choice: write her confessions, revealing everything she knows about war preparation in the UK and the secrets of the spy network, or continue to face torture (both subtle and brutal) and eventual execution. In the meantime, Verity worries about her best friend Maggie, the female pilot who ended up flying her into France. Facing damage to their plane from anti-aircraft fire on the flight in, Verity was forced to parachute in while Maggie crash-landed the plane. As Verity weaves her “confession” across pages and pages of random paper, the reader wonders, how much is true (“Verity” = "Verite", for “truth” in French), and how much is stalling for time, so that at least one of the women can be rescued? Wein creates an amazing balance of both deeply intimate moments and a thrilling adventure story, to be savored by adults and teens alike.
Posted by Hobo's Books at 3:27 PM No comments: