FIRST IN A NEW SERIES
Bean there done that
Romance is supposed to be the spice of life. But Maxie Pierce is so done with bad relationships well, almost. She just has to get rid of the latest loser, Roberto. Besides, she has more important things to worry about. Her daddy, Texas Jack Pierce, king of the chili cook-off circuit, has been missing for nearly six weeks now. In his place, she must team up with her irritating half sister, Sylvia, to promote the family business at the Taos Chili Showdown, to be judged by celebrity chef Carter Donnelly.
But when Maxie discovers Roberto's body in the chef's trailer only hours after publicly breaking up with him while wearing a giant red chili pepper costume she suddenly finds she's the one in the spotlight as the police pepper her with questions. Now this Chili Chick needs to kick up the search to catch the real killer and get back to finding her father
INCLUDES DELICIOUS RECIPES 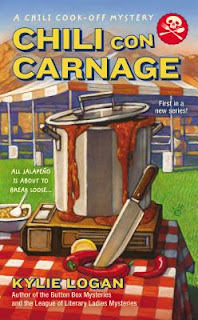