I Came Home, But It Wasn't Me: Memoirs of Vietnam Combat Veteran

On April 8th, 20117 from 11AM to 2PM, From My Shelf Books will be hosting Bruce Taneski and his memoir of the Vietnam War, I Came Home, but It Wasn't Me. Bruce made it home, but returned a damaged man.

The memoir comes full circle when he sits on his pack and eats a can of C-Ration spaghetti and meatballs while looking down at one of the two NVA soldiers he had shot dead a few minutes earlier. “Don’t mean nothing,” he thought. However, deep down inside, he knew it did.

Taneski explains everything in detail, down to the nuts and bolts of his P-38 can opener. At times, he writes with the innocence of a young man seeing the world for the first time. He shares the teachings of his sergeants, which Taneski took to heart to succeed in Vietnam. Much of this true story describes, “many of the mundane missions we went on,” which involved “just humping through the jungle fighting the red ants, leeches and mosquitoes.”

Taneski’s year peaked with two major operations. The first was the 199th’s final six-day sweep before returning to Fort Benning. The operation captured thirty-three NVA, while destroying an enemy hospital, training camp, and five hamlets. The second was a 5th Infantry Division engagement against a new NVA base camp near the DMZ, where Taneski finished his last month’s in country.His book clearly tells who Bruce Taneski is and why.

Bruce was intially diagnosed with PTSD in 1982, years after the war was over, but not his personal battle. He still struggles with PTSD, and this memoir was part of his path to healing. Come in and talk with Bruce and let him know how glad you are he made it home. Visit and show your support of our veterans, past and present. 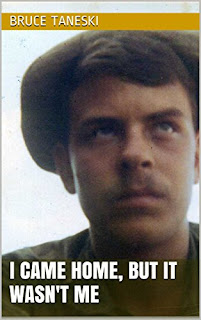